Added to basket
Current Shipping Updates
My Account   My Basket (0)

Is initial hair shedding when using the Hair Oil a common occurrence or cause for concern?

It's a question that's been asked over the years - although not very frequently. That's because the vast majority of customers don't experience increased shedding when first using the Hair Oil. It is quite uncommon.

Hair shedding, or increased hair shedding can be caused by a few different factors: overuse, an adjustment period or very infrequently - a reaction to one of the ingredients.

Overuse usually takes place due to a mistaken belief that the more often the Hair Oil is used, the better the results will be. Although this in itself isn't necessarily true, some people can use the Hair Oil more often than the suggested '2-3 times weekly' as their scalps are dry and can absorb the oil rapidly. Others cannot do so because the oil does not absorb as well into their scalp and follicles, meaning if they were to use too frequently, the constant layer of oil on their scalp would prevent oxygen from reaching it, which in turn would lead to increased shedding. It's often best to experiment and see which frequency of usage works better for you. But if in doubt remember: if your scalp readily drinks up the oil, you can increase usage. If it doesn't then don't!

The second most common cause is an adjustment period. It may be the case that your scalp has not been treated with an oil before and needs time to adjust, or clear damaged or weakened hair to make way for new, healthier growth. If that is the case, simply scale back usage to once per week until it settles down and then increase usage once the shedding reduces.

An allergic reaction is probably the least common cause for initial shedding and can be due to a citrus allergy or reaction to one of the other oils or extracts. In this case it is best to discontinue use all together.

Something worth bearing in mind is that it's completely normal for the average person - who isn't using a hair loss product, to shed up to 150 hairs per day. This in itself shouldn't be a cause for concern, unless the hair line starts to recede or the scalp starts to become visible.

Which Divine Herbal product is right for me?

New to Divine Herbal?
Not sure which of our products you need? Try our helpful guide: 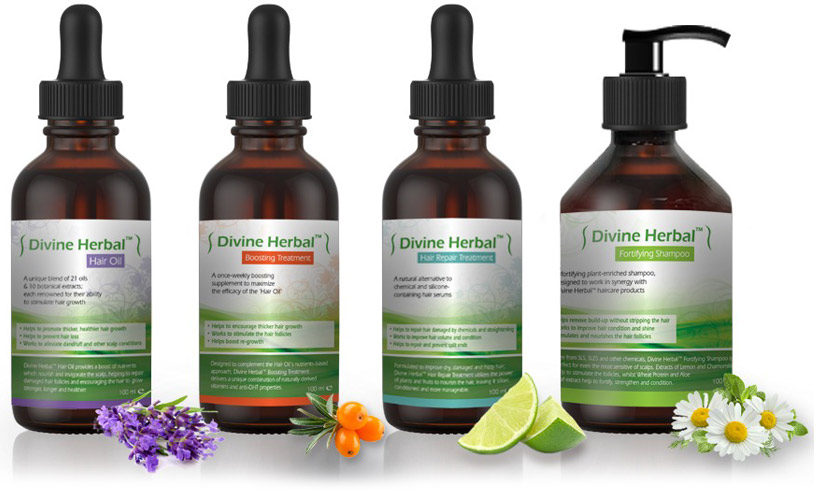 How does Divine Herbal work?

Our products combine natures own remedies and cures.

We have developed a range of products that tackle hair thinning and hair loss for scalp, eye lashes and eyebrows. We have also applied our skills to developing a facial serum that uses natural ingredients to tackle the various signs of skin ageing and damage – such as acne scarring and dark circles, as well as fine lines and uneven skin tone. In all our products we use natures' “well known” secrets. We combine the finest oils and extracts from countries across the world. Most of all, our products deliver real results.

"Thanks guys…noticing my hair is healthier and when I wash my hair definitely less hairs appearing in shower/wash basin."

"A fantastic product that has helped with my hair problem. Quick and speedy delivery too."

"I noticed an improvement in my hair thickness and less hair loss in a couple of months. I recommend it to everyone."

"Just writing this review for the excellent hair oil which is a great product for thinning hair. Also fast shipping which is good."

"I use it every single night and my alopecia is pretty much gone! That is in just 4 months. Can’t beat that."

"My hair was falling by the handful. This hair oil of yours has stopped it falling completely. I’m stunned!"

"A lot of people have commented my scalp is not that visible anymore so it’s definitely working."

"Two words: ‘Effective product’! (Hair Oil) I haven’t been able to get my hands on anything else as good as this... and I’ve tried them all!!!"

"Been using over 3 months and noticed my hair looks thicker and healthier. I've used the shampoo, boosting and hair oil. Thank you."